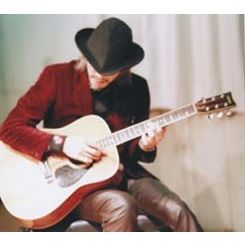 Donald McPherson, a native New Zealander has been playing the guitar since the tender age of 12, he studied at the Otago Art School in the '80s. and in the '90s he released a number of extremely limited lathe-cut folk records, Bramble, his debut full-length recording, was recorded straight to cassette in his bedrooms, (first Ravensbourne and then Dunedin, New Zealand) sporadically between 1995 and 2000. Utilizing steel-string, nylon, and electric guitar. Donald also was involved in the improvising group Three Forks recording for Metynomic and United Fairy Moons.

Tetuzi Akiyama is often associated with the improvising community in Tokyo generated around Tokyo's Off Site venue. But to Tetuzi's sound owes just as much to the country blues guitarists of the '30s. His sound has taken the blues form into a new world of minimalist improvisations. His loose playing side steps the usual clichés of the guitar in both the free improv and traditional folk scenes. He can be heard to amazing effect on ,"Time Between", on the locust music compilation Wooden Guitar. Also highly recommended is his spare blues ramblings on, Relator, on Taku Sugimoto's Slub label.

Tetuzi has a varied number of very different projects from free improvisations, working with musicians across the globe, to hard minimalist electric blues boogies, a startling example can be found on Idea Records "Don't Forget To Boogie" LP and Headz live CD version.