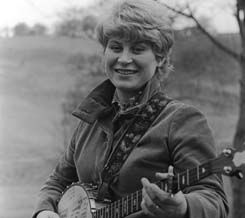 Those unfamiliar with the topography and historical geography of the SE of England probably picture bland, flat, grassy country - over-farmed, distorted, contorted by man - a land with no bones and no secrets. Anyone who has walked at dusk through the dark hollows of the ancient Weald or, with a stiff sea-breeze, on chalk downs in the footsteps of prehistory knows different. Shirley Collins' music, particularly where accompanied by the sonorous arrangements of sister Dolly, exemplifies this ambivalent environment of her ancestors.

Born and brought up in Sussex, Shirley and Dolly were surrounded by song. The hymns and ballads of the countryside sung in church or in the air raid shelter, the songs, collected by Cecil Sharpe, sung at school. In the Collins family existed an echo of that tradition which had mostly disappeared by the 1950s, the ancient and wise tradition of song. Over the downs another pocket of traditional knowledge - the Copper Family kept the candle burning too, but Shirley and Dolly, who had received a formal musical education, took the tradition on, exploring medieval instrumentation, working with innovators Davy Graham, Mike Heron, Robin Williamson, Ashley Hutchins, travelling on song collecting trips to the Appalachians and creating a body of work which is still relevant and resonant today.