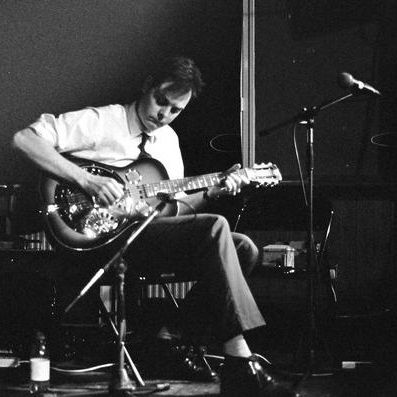 English acoustic guitarist C Joynes, a resident of Cambridge, heavy thumb-led finger-picking technique that harks back to traditional country-blues and early ragtime, however, he uses this technique to explore alternative melodic traditions: the English folk-tune; North and West African music; elements of classical Indian music; proto-minimalist and impressionist musics from the European classical tradition. His approach to the recording and compositional process contains a subtle and unassuming experimentation, at times including collaged fragments, field recordings, processing, en-plein-air recordings, and cut-and-paste. . (Rhodri Davies)

There are not too many guitar-players I respect without any reservation. Off the top of my head there’s Guitar Roberts, Bill Orcutt and Sir Richard Bishop. And C Joynes.

Of the former, I’d say Joynes’s closest stylistic analogue is, for my money, that noble Knight of Araby. Not that licks are copped from that Flower of Chivalry and his unimpeachable companions, the dervishes of delirium. But Joynes does borrow from as many and varied traditions as the Sun City Girls, and like them he never descends into world music blanditudination, nor the faux-hokey archaisms of Arcadie. His technique, like Sir Richard’s, is a fuller’s earth that purifies all such dross and fills the ear with myrrh of the sweetest grade. Not many traffic in liquors this strong, so hitch that pony, pilgrim, and drink a while. (Bruce Russell)