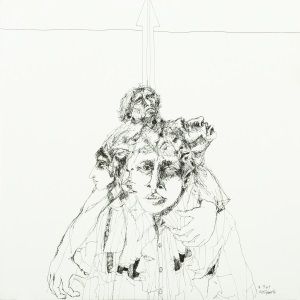 
First time vinyl reissue of Joe McPhee's classic CJR LP from 1969. Exact repress of the original artwork Trumpeter and saxophonist Joe McPhee's first album, Underground Railroad, has been virtually impossible to find on vinyl, issued in an edition of 500 copies on Craig Johnson's CJR label -- it was recorded next to Johnson's house at the Holy Cross Monastery in West Park, New York -- it sold out and was never reprinted on vinyl until now. Underground Railroad is comprised of three pieces, the title track, "Harriett," and "Message From Denmark." The band features McPhee on cornet, pocket trumpet, and tenor, Reggie Marks on tenor, soprano, and flute, bassist Tyrone Crabb, and Ernest Bostic on drums, and is a scathing fire music release. There are wild ecstatic interactions between McPhee and Marks while the rhythm section harness the moaning, screaming, crying, and wailing done by the front men. On "Harriett" and "Message From Denmark," the music takes on a decidedly more spatial feel! This is McPhee at the height of his powers of improvisation and composition. As far as vintage ecstatic free jazz goes it doesn't get much more nail-biting than this.